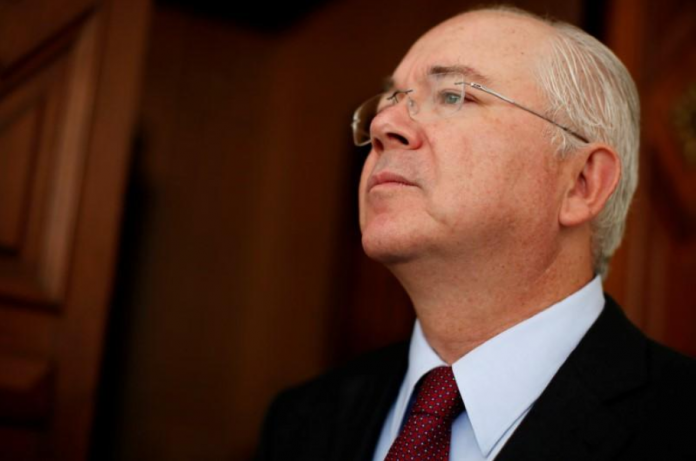 Prosecutor Tarek Saab said Ramirez and at least four other oil executives from the South American OPEC nation sold crude oil at below market prices in exchange for bribes.

Ramirez, who led PDVSA for a decade, told Reuters the allegation was a “blatant lie.”

Venezuelan authorities had warned earlier this month that they planned to launch a criminal investigation of the former oil czar, in an escalation of a corruption purge that has resulted in the arrest of dozens of senior oil executives.

”(Ramirez) appears as the main intellectual author of what happened,” said Saab, inviting Ramirez to Venezuela to defend himself.

Venezuela ordered the removal of Ramirez from his post as representative to the United Nations in New York last month.

“What the prosecutor says is not only false but demonstrates a deep ignorance,” said Ramirez.

He added that the Vienna office of PDVSA was not in charge of selling oil but rather monitoring prices of Venezuelan crude exports.

“It’s a blatant lie … intended to persecute not only me but my team.”

In his announcement on Friday, Saab also reported the arrest of Nelida Izarra, a former boss at a Vienna-based subsidiary of PDVSA, for alleged links to irregular purchases and sales of crude oil.

Saab also said he had ordered the arrest of two other PDVA officials who worked in Austria: Bernard Mommer and Irama Quiroz, as well as lawyer Mariana Zerpa. It is not immediately clear where Izarra was arrested or where the others currently reside.

Mommer was a pillar of oil strategy under former President Hugo Chavez, with oil sales serving as the cash cow for the country’s socialist revolution. He was key in planning the nationalization of swaths of Venezuela’s oil fields a decade ago and once served as the country’s representative to OPEC.

“The executives involved in the case were complicit in thesemodifications that caused serious damage to the Venezuelan State, allegedly in exchange for commissions in foreign currency,” said a statement from the state prosecutor’s office.

Critics say the ongoing oil graft purge has as much to do with score settling among old political rivals as it does with any real attempt to root out endemic corruption.

Ramirez, 54, has been an increasingly vocal critic of leftist President Nicolas Maduro in recent months. He was seen by some as angling to run in the 2018 Venezuelan presidential election, in which Maduro is expected to seek another term.

The alleged crimes being investigated occurred between 2009 and 2015. Saab did not explain how authorities had reached the conclusion that they yielded $4.8 billion in illicit profits.

The prosecution reported that 69 oil managers have been arrested over the last few months for corruption in PDVSA, including former oil minister Eulogio Del Pino, former PDVSA president Nelson Martinez and the board of directors of Citgo, a PDVSA subsidiary in Houston.